Roman Klun is the co-founder and managing partner of “Innsbruck Records;” a global label, management and media distribution company via The Orchard/Sony, co-founder of “Island of Toyz;” a responsive music oriented collaboration of songwriters, singers, musicians and producers (Popular Music for Popular Culture), and producer/mixer/mastering engineer and songwriter at “His House-Innsbruck Studios,” all located in New York City.

> RK has completed four full-length solo records with notable success, charting at #3 on British Columbia radio. As an experienced songwriter and musician, Roman has also shared the live stage with The Band Three, The Pete Levin Trio, The Joan Osborne band and has opened for the Legendary and 2X Grammy Award winner Levon Helm of “The Band” at the celebrated Midnight Ramble in Woodstock, NY.

> “IT WAS LIKE WE WERE ALL IN ONE ROOM” –Eiji Kadota (Taiwan): Regardless of where you may reside (Asia, Africa, Europe, North America, South America, Antarctica, Australia… or New York, Los Angeles, Nashville, Toronto, Berlin, Milan, Paris, London).  Working together in person on finalizing the production or mixes at the studio is not always possible with tour schedules or geographic location.  I’m thrilled to be working with “Source-Live,” enabling instant world-wide access over the internet (Fiber-Optic) directly to your listening environment (home studio, laptop or even iPhone) which is completely secure.  Either the “Live link” can be emailed or the “iPhone app” can be downloaded and before you know it – you will be listening to the production/mix in “real-time” through your own familiar speaker environment; while at the Hi-Definition quality of your production.  Melodyne pitch correction touch-ups are also possible.  See the eMixing page (Tweaked Master) for further details by clicking here. 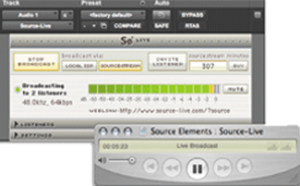